There are several day trips from Edinburgh that will leave you breathless! Sometimes we feel stuck in our routine and even living in such a beautiful city as Edinburgh is, we do need a break. I hope you will find my suggestions below as enjoyable as I do!

Small fishing village only 30 minutes away from Edinburgh. You can reach it by train, by bus or by bike if you want;) The old high street is stunning and the views on the gulf too! The greatest thing to do once in South Queensferry is getting on one of the boats to cruise the Firth of Forth (try to say it!). The cruise lasts about 1.5 hours with the option to stop in Inchcolm Island, home to a 12th century abbey. While you are just away for a couple of hours and you are within cycling distance from Edinburgh, this cruise really makes you disconnect. We saw lots of seals, both playing in the water and chilling on floating pieces of wood, plus the views on the region of Fife, with lots of green fields, are stunning.

This 15th century chapel is widely known because of its appearance in the Da Vinci Code’s novel, published by Dan Brown in 2003. Located in the lovely countryside just outside of Edinburgh, it is well worth a visit. The inside decoration is very impressive;)

You can easily reach this place by bus. However, if you want to pack more in your exploring day, I would suggest you join the Rosslyn Chapel & The Scottish Borders Rabbie’s Tour😉

One of the best day trips from Edinburgh in my opinion is a visit to Cramond Island. This Firth of Forth island is connected to the mainland at low tide and it’s a very interesting place historically and naturally.

Pitlochry is a beautiful town situated in the heart of Perthshire, the so called tree county. It was a pale October day, when we decided to get the train from Edinburgh for £10 and spend a day in Pitlochry. We walked through the forest and walked up the dam, which is very impressive to see. While we were walking through the forest, which is very well indicated form the town centre, we could hear some music and see some lights, blue, green, red. We got very curious and started walking off the path to see what was going on. It was the famous Enchanted Forest show, a sound ad light show that takes place in Faskally Wood. The show is particularly popular at night, but it was really impressive to watch it during the day. 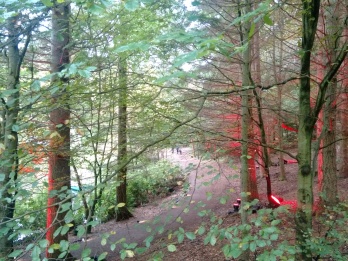 A wee town in the Scottish Borders, dominated by a 12th century Augustinian Abbey.

This is one of the finest castles in Scotland, rich in history and thought to be built in the 13th century.

The Hadrian’s wall is probably my favorite ‘attraction’ of 2016. I joined the Rabbie’s Hadrian’s Wall Tour a gloomy day of April and the place blew me away. Climbing a wall that was built by the Romans 2000 years ago was incredibly exciting. Not only can you admire the Hadrian’s wall, but you can also visit Vindolanda, which is the former Roman settlement located in the north of England. The Vindolanda tablets, well kept in the museum of Vindolanda, are the oldest handwritten documents existing in Britain. 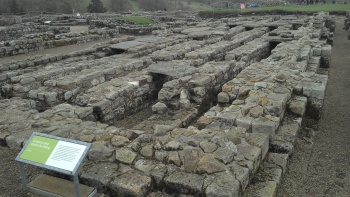 I like Melrose because of its many bakeries and craft shops in what is a very small town centre. You need to try a sausage roll from one of these shops…and then yes, of course, you can visit its stunning Abbey ruins.

I would love to hear any of your suggestions about other day trips from Edinburgh!